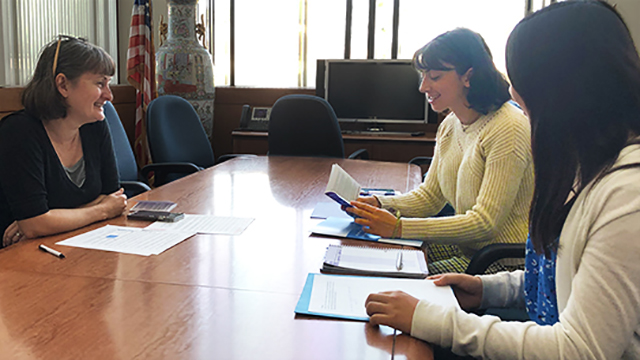 Culver City HS STF leaders meet with Mayor Sahli-Wells to ask for her support to pass a resolution by the Culver City City Council adopting the Convention on the Rights of the Child. Photo by Kristin Ghazarians

October 30, 2019: In 2009, on the 20th anniversary of the Convention on the Rights of the Child (CRC), STF members urged Los Angeles, Santa Clarita and Santa Monica City Councils to pass resolutions adopting the CRC on a local level. Inspired by their success, Culver City HS STF leaders recently met with Culver City Mayor Meghan Sahli-Wells to present a draft resolution asking the City Council for its support of the CRC.

The mayor enthusiastically supported the proposal and encouraged the students to attend the next City Council meeting on Monday, November 18, to present their draft resolution to the entire council.

Mayor Sahli-Wells also offered to draft a proclamation that November 20, 2019 be officially recognized as the 30th anniversary of the CRC in Culver City. She will present her proclamation at the November 18 meeting.

Congratulations on such an impactful meeting Culver City STFers! The goal now is to get a strong student turnout at the November 18 City Council meeting to show their support for this initiative! If you’re interested in attending, contact Kristin for details.

Permanent link to this article: https://www.hrwstf.org/wordpress/culver-city-stf-meets-with-mayor-sahli-wells/