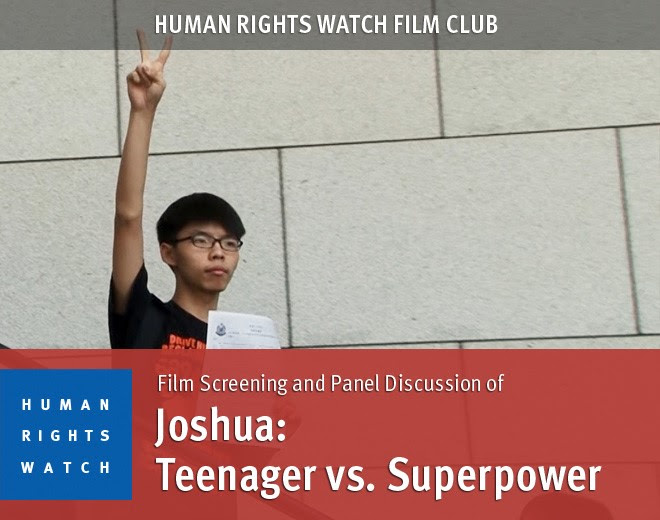 Get your tickets for the Human Rights Watch Film Club’s next screening, “Joshua: Teenager vs. Superpower,” Sunday, September 17. STF will be saluted at this event, including panel moderator, STF Director Pam Bruns, and a student panelist. Help us fill the theater!

See you there,
Pam, Kristin and Nancy

Join us for a special screening of Joshua: Teenager vs. Superpower, a remarkable portrait of courage, resilience, and the propulsive power of youthful idealism.

Rallying thousands of students to skip school and occupy the streets of Hong Kong, teenager Joshua Wong becomes one of the autonomous territory’s most notorious dissidents, successfully disrupting government plans to devolve power back to China. This inspiring documentary spends years tracking the movement from grassroots disruption to national politics. Following tear gas attacks, multiple arrests and an exhausting 79-day campaign to shut down Hong Kong’s financial district, Joshua moves on to the next phase of the movement—facing down the superpower from inside the government itself. 2017 Sundance Audience Award: World Cinema Documentary

Tickets are unreserved and seating is first-come, first-served. Proceeds from this event will support the work of Human Rights Watch around the world.

Permanent link to this article: https://www.hrwstf.org/wordpress/dont-miss-joshua-teenager-vs-superpower/