A Night to Remember: HRW Voices for Justice Dinner 2017 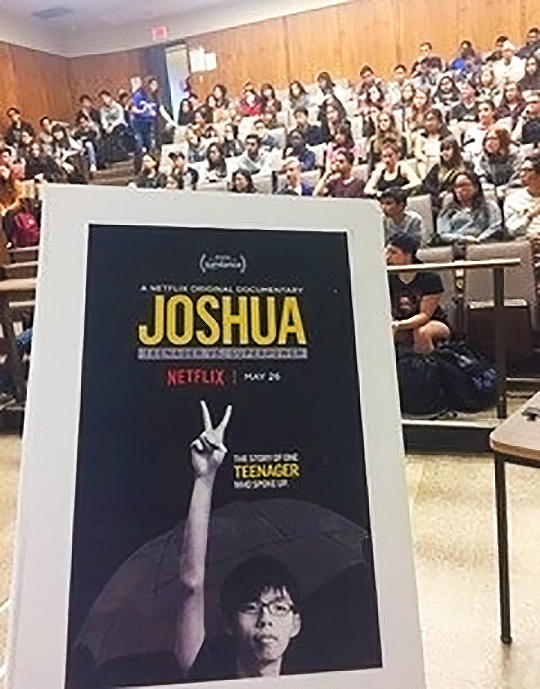 “Joshua: Teenager Vs. Superpower” poster at Academy of the Canyon’s screening on Novmeber 17, 2017. Photo by Nancy Nazarian Medina

November 17, 2017: The Academy of the Canyons STF chapter hosted more than 200 students for the film “Joshua: Teenager vs. Superpower,” on the campus of College of the Canyons in Santa Clarita Valley. The documentary follows Joshua Wong, a teenager who rallied thousands of students to skip school and occupy the streets of Hong Kong. The film follows Joshua as he becomes one of the autonomous territory’s most notorious dissidents, successfully disrupting government plans to transfer power back to China.

The event was well received and students asked questions concerning Joshua Wong’s sentencing to jail terms. Students said Joshua’s courage inspires them to stand up to injustices here at home.

After the screening, the audience was encouraged to show their support for the film and to spread awareness of the challenges to democracy in Hong Kong by utilizing social media. Each post with #JoshuaMovie, #TeenagerVsSuperpower and #Netflix between now and January 2018 also draw attention to the film’s possible nomination for an Academy Award.

Permanent link to this article: https://www.hrwstf.org/wordpress/joshua-teenager-vs-superpower-inspires-stf/