“The Power In Your Hands”

We are delighted to invite you to our upcoming Film Club screening of Bellingcat – Truth in a Post-Truth World at Universal Studios on Sunday, June 2nd starting at 3:45pm. With a number of Human Rights Watch supporters and researchers coming to Los Angeles from around the world that week, we have decided to make this our biggest, most exciting Film Club screening yet!

On June 2nd, we invite you to Sound Stage 29 in the heart of Universal Studios and will take you on a private tour of the lot! All this for our regular price and with our usual high quality movie, panel discussion, and reception. You don’t want to miss it!

Get your tickets now. We look forward to welcoming you at Universal Studios on June 2nd! 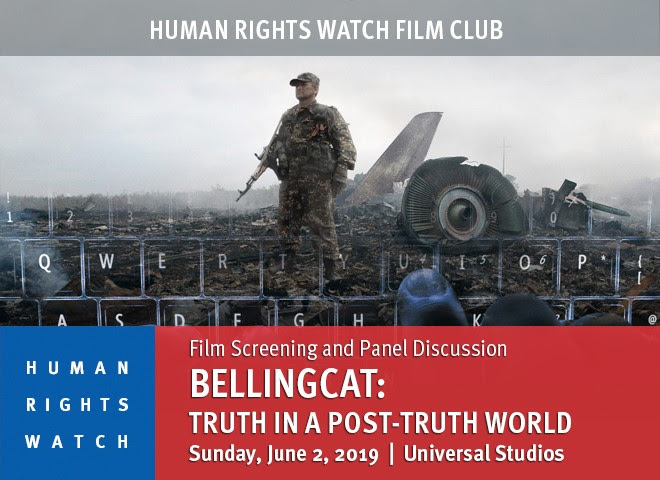 Purchase tickets today!
Let us know if you would like to volunteer!

Tickets will not be sold at the door.
Parking will be available at the Frankenstein parking at a reduced rate.

Bellingcat – Truth in a Post-Truth World follows the revolutionary rise of the “citizen investigative journalist” collective known as Bellingcat, dedicated to redefining breaking news by exploring the promise of open source investigation. Similarly to Human Rights Watch, this highly skilled and controversial collective exposes the truth behind global news stories. In the last decade and increasingly, Human Rights Watch is indeed harnessing technology, exposing violations remotely and in near real time, through geospatial and data analysis.

All attendees are invited to stay after the screening for a panel discussion, followed by a cocktail reception with Human Rights Watch researchers and optional tour of Universal Studios.

We are expecting a larger than usual audience, including a number of HRW researchers, staff and committee members from around the world. As a supporter of the film club, you don’t want to miss this opportunity to mingle with these international leaders in the human rights movement.

Universal Studios Hollywood is one of the oldest and most famous Hollywood film studios still in use, as well as a theme park. Attractions include the World-Famous Studio Tour, which allows visitors to see sets from the most iconic films and television shows, such as Jaws, Psycho, King Kong, War of the Worlds and many others.

Tickets are unreserved and seating is first-come, first-served. Places are limited and tickets will not be sold at the door.

We need volunteers! Contact Kristin if you are available to help!

Permanent link to this article: https://www.hrwstf.org/wordpress/our-most-exciting-film-screening-yet-sunday-june-2nd-at-345pm/