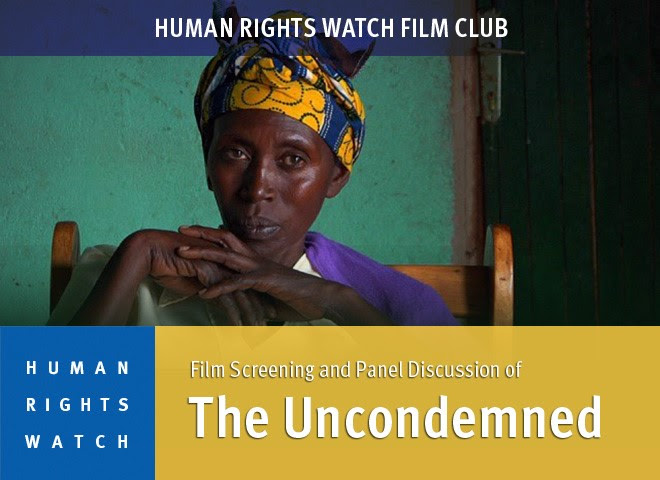 Join us for a special screening of The Uncondemned, an extraordinary documentary following a group of lawyers and activists who prosecuted rape as a crime against humanity. This is the story of their fight for the first conviction.

Both a real-life courtroom thriller and a moving human drama, The Uncondemned tells the gripping story of a group of young international lawyers and activists who fought to have rape recognized as a war crime, and the Rwandan women who came forward to testify and win justice for the crimes committed against them. This odyssey takes the crusaders to a crucial trial at an international criminal court, the results of which changed the world of criminal justice forever.

“What ‘The Uncondemned’ convincingly demonstrates is the cumulative power of a small group of people with an intense passion for justice, idealists with practical experience whose belief in the power inherent in speaking the truth is not to be denied.”
– Kenneth Turan, LA Times

The Uncondemned won the Brizzolara Family Foundation Award for a Film of Conflict and Resolution and the Victor Rabinowitz and Joanne Grant Award for Social justice at the Hamptons International Film Festival 2015. The film was also nominated for the Adrienne Shelly Award at the Women Film Critics Circle Awards 2016.

All attendees are invited to stay after the screening for a Q&A with the director of the film and the senior counsel in the US Program of the Human Rights Watch.

Permanent link to this article: https://www.hrwstf.org/wordpress/the-uncondemned/